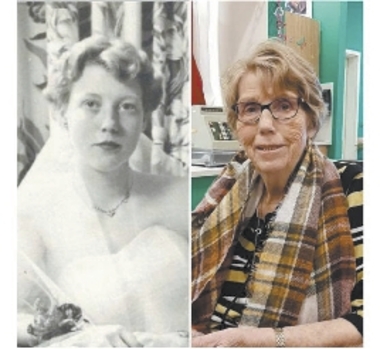 Mom passed away peacefully at her home in Journey Club on Thursday, November 18, 2021 at the age of 84 with her family by her side.

She was born in Calgary on September 7, 1937 to parents Elmer and Nora Lausen. Mom was raised in Brooks, Alberta along with her sister Peggy. Elmer was the Station Agent for the CPR and Nora was a teacher. After grade school, Ellie attended the University of Alberta, Calgary, taking Education. She taught in Ogden and at the one room schoolhouse still standing east of MacLeod Trail in Midnapore.

After a trip by ship to Europe with two best friends, she met and married the handsome Billy Taylor on December 19, 1959, then moved to the farm close to Carseland where the couple raised three children. They moved from the farm to Strathmore in 2006.

Ellie was very involved in the community, volunteering her time in many ways. She was a long-standing member of the Carseland Public Benefit Club, played the piano at the Dalemead Church for many years and served with several committees for the Calgary Stampede, including the Youth Talent Committee and as Chairperson of the Stampede Band Committee.

Ellie was creative, enjoying quilting, pottery, calligraphy, needlepoint and knitting. She also enjoyed curling and golf over the years.

Mom and Dad also loved to travel and made many friends with trips overseas, the U.S. and our own great country. The family recreation home in Fairmont was also a place that great memories were made.