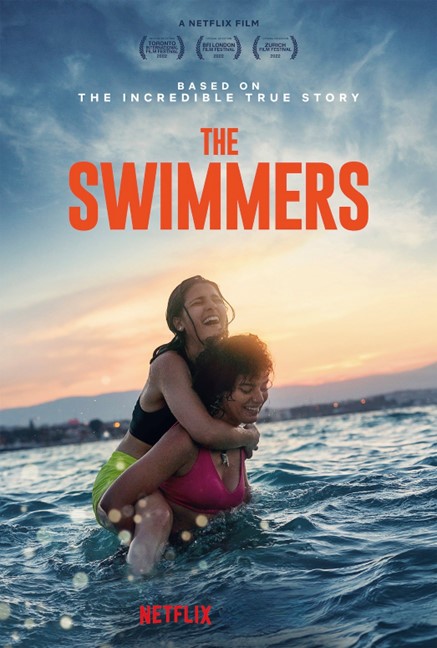 Movie Festival Night at the CRTA: The Swimmers

Description of Activity: Join us for a zoom dinner/movie/discussion night on Tuesday January 17th at 6 PM.

This film deals with very difficult subject matter and viewers should be advised it may not be suitable for a younger audience.

What better way to come together (virtually) than with friends, former colleagues and family to have a bite and watch a stimulating movie.  Our members love the discussion at the end of the film to share reactions and ideas about the film.  If you watch the film at another time, you can still join us for the discussion!

We will be showing award winning festival films over the next several months and you are encouraged to mark your calendar so you don’t miss any of them!

In the context of the contemporary refugee crisis, Sally El Hosaini did not just want to present the story of the Mardini sisters and the other refugees. Rather, her intention was to show in a realistic style, what refugees are going through in real life. In an interview about the film, Yusra Mardini said “After the Olympics, I realised that it’s not just my story anymore. I realised that my responsibility is to raise awareness and bring hope to millions of refugees around the world and speak for all of those who do not have a voice.”

This film will stimulate discussion as it highlights the challenges that people living with war and destruction in their country lead many to take the risks as refugees for freedom, safety and reaching their dreams despite the odds against them.  At the end of the film, you will be experiencing a wave of emotions – and our discussion will be open for sharing your own observations in the context of your experience as educators and as a global citizen and Canadian.

As before, we will be using the zoom platform for this event. Once you have registered through the Event Registration on the CRTA website or via email, Ron Jeffery will send you the link to the zoom meeting room along with instructions. If you do not receive the link by January 16th, please contact Ron directly.

Ron will briefly introduce this 134 minute film and will lead the discussion following the film. We expect it will be a thoughtful and stimulating evening.  Our zoom portal will open at 6 PM.

Please note that the film will begin at 6:15 after the introduction and members have logged on.  All will be muted during the film and unmuted for our discussion.  Late arrivals may not be admitted to avoid disruption during the movie. The film will end at approximately 8:30 PM. (2 hr 14 min)

THE SWIMMERS is a film available to watch on Netflix.  If you have a subscription, you can watch an enhanced version on the platform on your own tv.  You just have to search for the film on Netflix.

All other aspects will remain the same.  Those who watch on Netflix will start at 6:15 and we will all get together to discuss the film shortly after it ends approximately 8:30 PM.  Movie length is 2 hour and 14 minutes.

No one is left out! And of course….you can have dinner or popcorn during the film without disturbing anyone!!