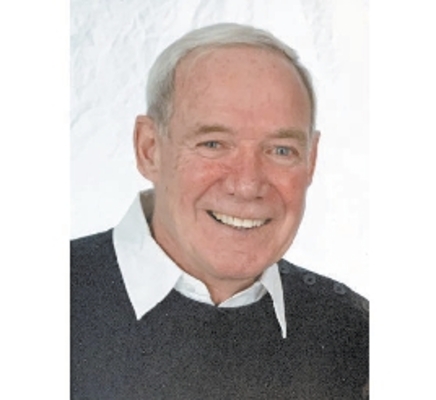 Ken passed away peacefully on October 12, 2021, at the age of 86 years, with his wife, Mary, and his four children by his side. He was a loving husband, father, grandfather and soon to be great-grandfather. Ken was born in 1935 and was raised in Montreal. His parents Sidney and Mary immigrated to Canada from England and Ireland respectively. Although they didn’t have much, they were rich in love, humor, and faith. He was the second born of four children and was big brother to his sisters Patricia, Ann, and Margaret. Ken attended St. Joseph’s Teachers College soon after graduating from D’Arcy McGee High School. There he met his soulmate of 62 years, Mary (nee Jaksi). They were married on August 15, 1959. In addition to meeting Mary,
Ken developed lifelong friendships, many of which lasted over 60 years. Ken and Mary had four children: Brian (Natalie), Ann-Marie (Glenn), Tom (Julie), and Dave (Barb). Like his father, family was his priority, and many a weekend and summer were spent skiing, camping, fishing, travelling, and skating with the kids in tow. Ken was very proud of his education and his role as an educator. He was first and foremost a teacher and after completing his master’s degree at McGill University, served as a school principal in Montreal’s West Island and LaSalle. He and Mary moved the family to Calgary in 1981 on the advice of one of his closest and dearest friend Bill, where he joined the Calgary Catholic School District and served as principal of St. Cecilia, St. Benedict, and St. Bernadette schools. He was a well-respected administrator and a mentor to many.
Ken retired in 1993 to pursue his love of gardening, fitness, fishing, running, travel, and weekly ‘Papa’s Days’ with his grandchildren. Ken has eight grandchildren: Danielle, Nicole, Alyssa, Kylie, Devyn, Nolan, Chris, and Nathan, and prior to his passing, was informed that two great-grandchildren were on their way. We are thankful that all his grandchildren were able to say their final goodbyes before he passed. In addition, Ken had numerous nieces and nephews he loved dearly. Ken was very proud of his level of physical fitness. An avid runner, he once qualified for the Boston marathon and up until three years ago, was in the gym nearly every day. He earned the nickname of the ‘Energizer Bunny’ for his ability to outlast others half his age in the weight room as well as on the running track. Even when he was no longer able to go to the gym, he spent almost every afternoon running thirty-minute laps, three to four times a day inside the house. He would often boast that he could run better than he could walk. The last three years of Ken’s life were not easy, yet his strength of character, hope for the future and his love for family remained strong throughout. Always the teacher, he taught by example. Ken’s compassion, sense of humor, advice and support will be dearly missed. A special thank you to the staff of Evanston Grand Village and Unit 62 at the Foothills Hospital for the great care and attention they provided both Ken and Mary during this difficult time.